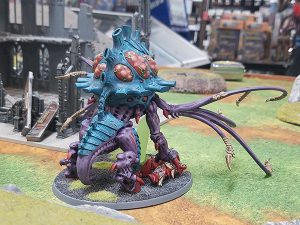 Warhammer 40,000, usually abbreviated to Warhammer 40K, or simply 40K, is a tabletop miniatures game from British company Games Workshop.  Warhammer 40K was originally introduced in 1987 as a science-fiction accompaniment to the game Warhammer Fantasy.  The Warhammer 40K setting takes place near the end of the 41st Millennium and the beginning of the 42nd.  The Imperium of Man is beset on all sides by aliens, followers of Chaos, and internal strife.  It is a setting best characterized by a dark, gothic feel.  Much technology has been lost to the ages, and the savior of the human race, the Emperor of Mankind, lies between life and death, interred in a life-support throne for the past 10,000 years. 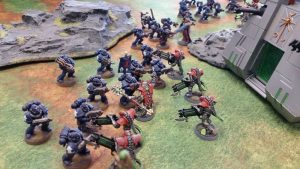 In Warhammer 40K, players fight battles in the far future with miniatures that make up their armies.  There are a large number of armies available, grouped roughly into three categories:  the armies of the Imperium of Mankind, ranging from genetically enhanced Space Marines, to the common men and women that make up the Imperial Guard; the Xenos threat, representing the various alien species that co-inhabit the galaxy, including the numberless Ork hordes, and the small, elite forces of the Aeldari; and the followers of Chaos, the heretical great enemy that seeks to corrupt the entire galaxy to the worship of the Chaos Gods. 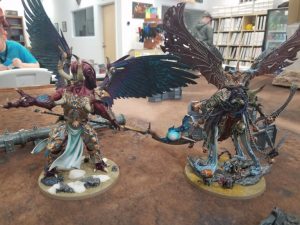 Infantry squads range in size from 5 to 30 figures each, and are supported by mechanical walkers, tanks, daemons, and other monstrous creatures.  An army may contain anywhere from a small handful of miniatures to hundreds, depending on their play-style.  Miniatures are mostly plastic models that must be assembled, and optionally painted, before play.  Games Workshop puts a lot of emphasis on the hobby portion of the game–building and painting miniatures.  While some players are content to play with unpainted minis, most players work towards the goal of having a fully painted army that they are proud to show off on the battlefield.

The 9th Edition of the game was released in the summer of 2020, and represents an incremental update to the ruleset from 8th edition.  Nearly all armies should have an updated 9th edition codex by Spring of 2023.   Nearly all games played in store are played using the 9th edition ruleset.

The Relentless Dragon carries a huge selection of Warhammer 40,000 products, from starter sets to all of the latest releases.  Our selection represents the highest level of the Games Workshop Independent Stockist program.  In addition, we also carry a large selection of Games Workshop exclusive web store products that are not normally available in retail stores!

For hobbyists, we carry the full P360 line of Citadel paints, brushes, and hobby supplies, including the new Contrast line of paints.

If we don’t have something in stock, we can get it in a matter of days as long as it is currently available from Games Workshop!

Play Warhammer at The Relentless Dragon in Southern New Hampshire

Both Relentless Dragon stores have a number of 4’x6′ tables that are perfect for playing Warhammer 40K (and most other tabletop wargames).  Each table has either a cloth battle mat, Realm of Battle board, or other custom-made table surface to provide a stunning backdrop for battles.  In addition, ample terrain pieces are available to customize your play experience.

Join our Warhammer specific Facebook group to find out the latest on news and events, as well as to find opponents outside of regularly scheduled play times.

In addition to our regularly scheduled open play times, we also host tournaments and other gatherings of interest to Warhammer players, including painting days, and terrain workshops.

In the grim darkness of the far future, there is only war . . .