Non-collectible card games are games that appear similar to board games at first glance, but utilize cards for their primary game play component.  These games can range from titles where you simply shuffle a deck of cards and play to games that involve building decks as you play.  The category is referred to as “non-collectible” because all of the cards you need to play the game are included in the package–there is no need to purchase random boosters or buy singles to complete your collection. 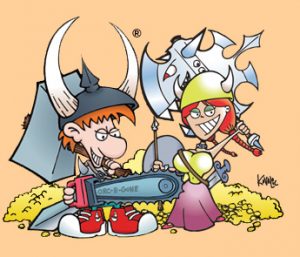 One of the longest running non-collectible card games is Munchkin, from Steve Jackson Games, in which players assume the role of a dungeon adventurer–but with a twist. To quote the Munchkin website, “Go down into the dungeon. Kill everything you meet. Backstab your friends and steal their stuff. Grab the treasure and run.”  Munchkin is not your typical cooperative dungeon delve!

There are also myriad smaller expansions which either offer an expansion to their respective base games or add a new twist to any game of Munchkin.  Holiday expansions are common, adding themes of Christmas, Valentine’s Day, and Halloween to your Munchkin games.

The Relentless Dragon carries the full line of Munchkin games, including base sets, Deluxe base sets, expansions, and boosters.  We also carry numerous Munchkin accessories, including play mats, custom dice, and card sleeves.

Boss Monster is a game inspired by classic 8-bit video games. In Boss Monster, 2 to 4 players compete to build the ultimate dungeon. Try to lure adventurers into your dungeon, and then be sure to defeat them before they reach your “boss” monster.  Be the first to defeat ten adventurers and collect their souls to win.  But beware, if you don’t defeat the adventurers before they reach your chamber, you’ll suffer a wound.  Take five wounds and be eliminated.

Since its introduction in 2013, Boss Monster has proven to be very popular.  It has spawned several small expansions, as well as an all-new base game, Boss Monster 2, which is fully compatible with the original.  The Relentless Dragon carries the full line of Boss Monster, including the base games, expansions, and accessories, including playmats and card storage boxes.

Sentinels of the Multiverse 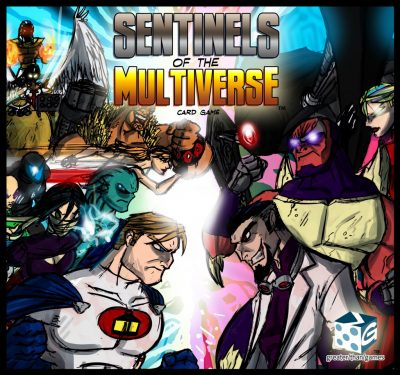 Sentinels of the Multiverse is a multi-player cooperative card game based on comic book heroes fighting their villainous nemeses in strange and exotic locales.  The Sentinels of the Multiverse are a diverse super-hero team dedicated to protecting the multiverse from a string of nefarious villains. Players must work together and plan their strategies if they hope to have a chance to defeat the villain.

In addition to the villain and his or her henchmen attacking the heroes, the players must also contend with the environment in which they are fighting.  One game might see the heroes fighting in a verdant jungle filled with dinosaurs, while the next might be fought in a chemical factory with dangerous vats of chemicals as hazards.  The environment deck doesn’t discriminate, though, it may end up hindering the villain as much as the players!

Sentinels has been expanded over the years to include several larger expansions which add new heroes, villains, and environments, as well as a series of small expansions which may add a single hero, villain, or environment.  Small expansions are a great way to change up your game without a large monetary expense. In addition to the base game and expansions, The Relentless Dragon also carries accessories for Sentinels of the Multiverse, including playmats, oversize villain cards, and additional tokens to track damage and effects.