What is Warhammer Age of Sigmar?

Warhammer Age of Sigmar is a skirmish-level fantasy miniatures game played using masterfully-sculpted 28 mm Citadel miniatures. Age of Sigmar, or AoS for short, is Games Workshop’s successor to the older and now defunct Warhammer Fantasy Battles.  Age of Sigmar was introduced in 2015 and updated with a second edition in 2018.  The game’s popularity has exploded since the release of the second edition.

What is the Warhammer Hobby?

Age of Sigmar represents more than just a game.  Building and painting miniatures is a large part of the hobby.  Many hobbyists spend countless hours building and modifying their miniatures and then lavishing them with complex paint jobs. 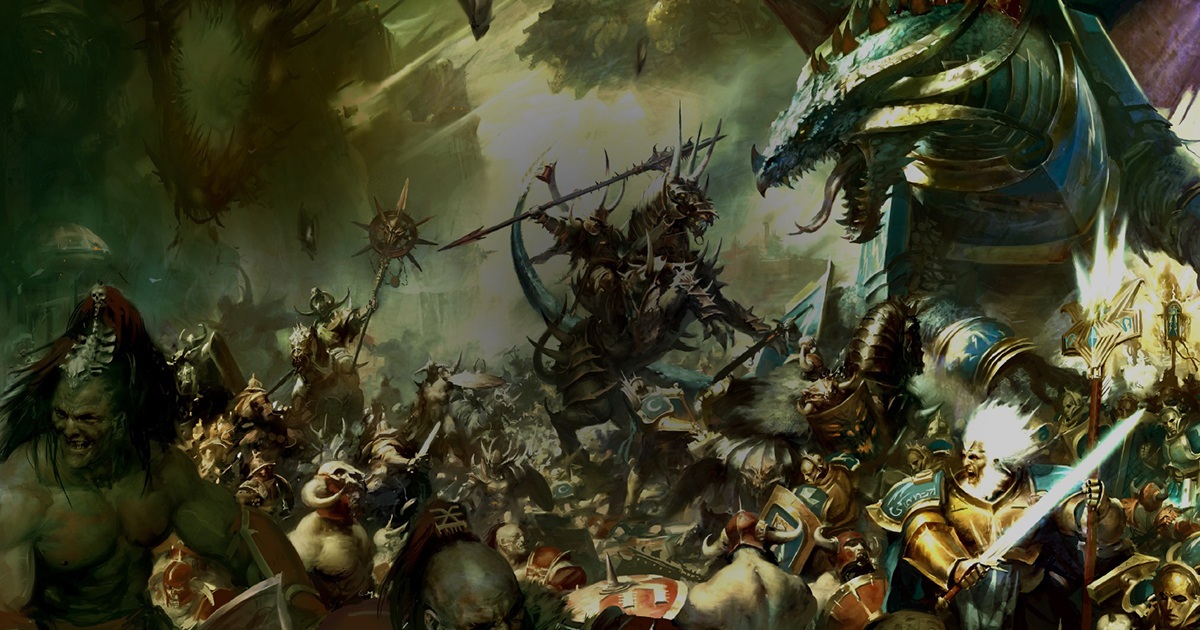 The Mortal Realms were, during the far-distant Age of Myth, prosperous. That is, until the Gods of Chaos turned their attentions to the realms.  All the realms but Azyr fell to the predations of hordes of depraved followers of Chaos and other daemonic creatures during what came to be known as the Age of Chaos. Civilizations burned and Chaos was nearly triumphant.

The God-King Sigmar retreated to his domains in Azyr, and seemingly left the mortal realms to be consumed by Chaos.  But, Sigmar had a plan.  Gathering the souls of the bravest mortals at their moments of death, Sigmar reforged them into an unstoppable army–the Stormcast Eternals.

Just as the light of hope is about to be extinguished, Sigmar unleashed his Stormcast Eternals from the gates of Azyr.  The Age of Sigmar has begun.

All of the armies of Age of Sigmar are roughly divided into four Grand Alliances:  Order, represented by the good forces of the realms–a coalition of humans, elves, and dwarves; Death–the forces of the undead; Destruction–the wilder forces of the world, such as the orcs, goblins, and ogres; and Chaos–all of the forces that fight for Chaos, including corrupted humans, daemons, and the rat-like Skaven.  The three non-Chaos Alliances maintain a rough allegiance against the forces of Chaos, which are considered the Great Enemy.