The Wizards of the Coast Era:

The first generation sets covered the original 151 Pokémon of the Kanto Region, as explored in the original Red, Blue, and Yellow games for the Game Boy.  The card design for this 1st generation is informally called the “Base-Rocket Design”. 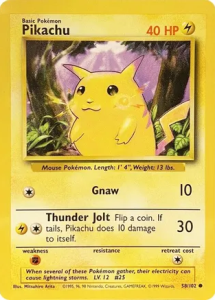 The 2nd generation sets covered the expanded pokédex of the Johto Region, as explored in the Gold, Silver, and Crystal games for the Game Boy Color.  Two new Pokémon types were introduced in this generation–Darkness and Metal.

These sets, with the exception of Legendary Collection, featured an updated card design known as the “Neo Design” as the set names all start with Neo.  Legendary Collection, being a reprint set kept the original Base-Rocket design for its cards.  Interestingly, the Southern Islands Collection, which was a special promotional release, featured the new Neo design in English, but the older Base-Rocket design in Japanese. This was due to the 2-year time delay between the Japanese release and the later English release. 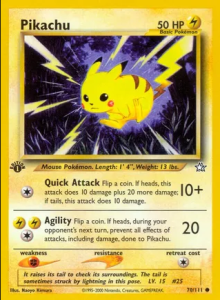 The next group of sets continued to cover the Johto region, but featured a new card face which supported the e-Reader add-on to the Game Boy Advance.  Cards contained ‘dot-code’ along the borders which could be scanned with the e-Reader to reveal pokédex entries or other information. 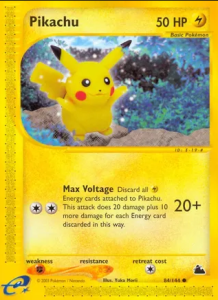 The 3rd generation of TCG sets featured a change in publisher from Wizards of the Coast to The Pokémon Company.  The sets in this generation through EX Emerald, as well as the final set, EX Power Keepers, feature the Hoenn Region, as seen in the core games Ruby, Sapphire, and Emerald for the Game Boy Advance. EX Unseen Forces features Pokémon from the 2nd generation Gold, Silver, and Crystal games. The sets from EX Delta Species through EX Dragon Frontiers take place in an all-new region not seen in the video games known as Holon. Pokémon in Holon were changed by electromagnetic radiation, as represented by Delta Species Pokémon cards, where the Pokémon’s type is different from normal.  For example, Pikachu in the Holon region are metal types, rather than electric.

This generation also introduced a brand new class of Pokémon, the Pokémon-ex.  Pokémon-ex are stronger than normal pokémon, but also have a downside when they are defeated. Pokémon-ex featured throughout the EX era.  A second class of new pokémon were introduced beginning in EX Team Rocket Returns, the Pokémon Star.  Pokémon Star featured alternate (“shiny”) colorations of pokémon. 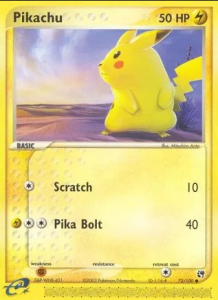 The fourth generation of sets features the Sinnoh Region, as featured in the core games Diamond, Pearl, and Platinum for the Nintendo DS.

Pokémon-ex and Pokémon Star card types were retired, and new Pokémon LV.X were introduced in their place. In between the fourth and fifth generations of core games, Nintendo released HeartGold and SoulSilver for the Nintendo DS.  These were highly-popular re-imaged versions of the original Gold and Silver games from the Game Boy Color era.  This “sub-generation” included four HGSS sets, plus Call of Legends, a stand-alone set featuring a mix of reprints and cards previously unreleased in English.  Call of Legends helped to bridge the gap until the release of the Black and White series of games.