Commander is one of the most popular multiplayer Magic formats and enthusiasts have been anxiously awaiting new cards and decks–their wait will soon be over! Each of these new Commander offerings includes a 100-card preconstructed deck and three oversized, foil legendary commander cards (that also appear in the deck). The decks are filled with cards from throughout the history of Magic and also include 15 new Magic cards in every deck!

The five new Commander decks each contain two brand new three- color legendary creatures and 13 other never-before-printed cards. There are 51 unique new cards spread across the five decks (some cards appear in multiple decks). These new cards will not only bring excitement to the Commander format but are also legal for use in Vintage and Legacy tournaments!

Commander 2013 preconstructed decks will be releasing on November 1st, 2013 and will be in high-demand due to limited quantities being available. We will be taking pre-paid pre-orders in the store starting today for individual decks. Pre-orders will be taken on a first-come, first-serve basis and will be limited to one copy of each of the five decks per person. The MSRP per deck is $30.00 and only pre-paid orders can be guaranteed. 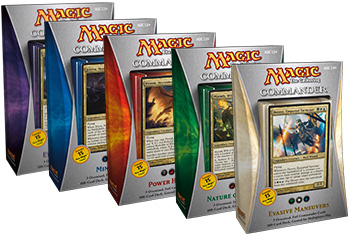