The Relentless Dragon is proud to be hosting the ONLY X-Wing Wave IV Pre-Release event in New Hampshire! On May 31st, you will have a chance to check out all four new Wave IV ships before they are released to the general public.

This will be a swiss style event. Each player must bring a legal 100 point force with which to play. For this special pre-release event, after the standard Swiss rounds are completed the top two players will have a chance to create a new 100 point build using two of the four new ships each! The first place player at the end of the standard rounds will have the choice to use the two new Imperial ships, the Tie Defender and Tie Phantom, or the two new Rebel ships, the Z-95 Headhunter and the E-Wing, in a new 100-point formation. The second place player will use the remainder.

The top four players will each go home with one of the four pre-release starships! (The 3rd and 4th place finishers will need to wait until the end of the special final round in order to receive their ship). In addition, the top 16 players will each receive an exclusive alternate art Bandit Squadron pilot card.

Pre-registration in-store is highly recommended as space constraints will necessitate a strict limit of 32 participating players. As this is the only X-Wing Pre-Release event in NH, slots will fill up quickly. For those who do not pre-register, sign-ups for the event will begin at 10AM on Saturday May 31st in store, with a starting time for round 1 at 11AM.

Cost for entry is $10. We will also be giving away various door prizes throughout the event. 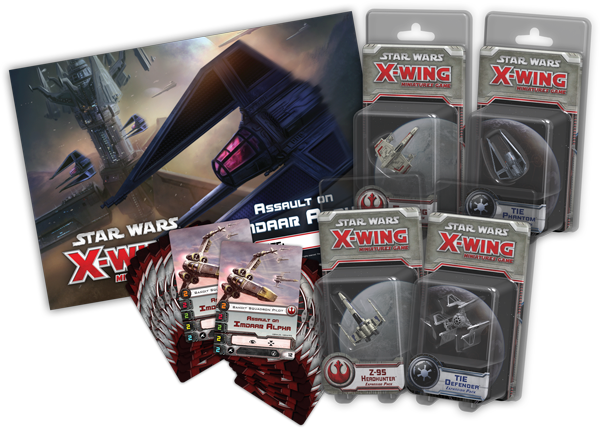