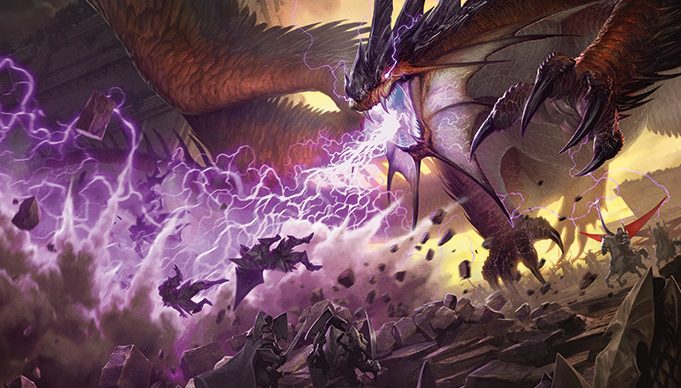 Dragons of Tarkir is the latest set for Magic: the Gathering, and the final set of Tarkir block.
Dragons of Tarkir continues the storyline from Fate Reforged, presenting a different “current” timeline after Sarkhan saved Ugin in Fate Reforged. The five great clans no longer exist, however five two-color clans each dedicated to a particular elder dragon lord now exist in their place.

This is a sealed deck event and continues the tradition of allowing players to choose from five different pre-release kits, each focused on one of the five new dragon clans of Tarkir. Each kit contains 4 packs of Dragons of Tarkir, 1 pack of Fate Reforged, 1 special pack of clan-aligned cards (including the pre-release promo), a spindown die, and more. Each player builds a 40 card minimum deck from the cards in their kit. 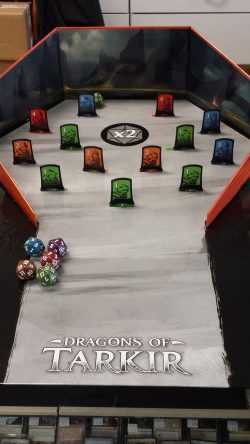 As a player, you will also be able to participate in the Tarkir Dragonfury skill game. Assume the form of one of the 5 elder dragons, and unleash your breath weapon on the inhabitants of Tarkir. Players will be allowed two chances to roll their spindown die to knock down as many pieces as possible and score points. Receive exclusive alternate art promo cards based on your score!

Pre-registration (at the store or over the phone) is STRONGLY recommended. Pre-Release events are very popular and the total number of players in each of the five clans will be limited. The total players per event will be capped at 35. Due to the popularity of this block, events are likely to sell out.

There will be 4 total swiss rounds with prize payouts based on your overall record in the event. In addition, each player who wins a round will get a free draw from the Foil Board! The foil board will be seeded with lots of promos and other foil cards, including some very special surprises!