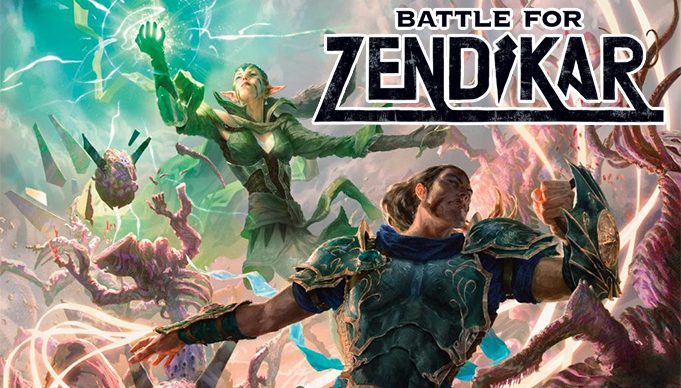 The original Zendikar set was one of the most popular Magic sets of all time due to fetch lands, the landfall mechanic, and full-art basic lands. Battle for Zendikar builds upon this popularity, introducing an all new set of dual lands, new full-art basics, and “Zendikar Expeditions”, a special 25-card insert set of full-art foil lands, including fetchs, shocks, and the new duals. These cards will be HOT.

This is a sealed deck event where each player will receive a special kit containing six Battle for Zendikar pre-release packs, a promo card, and a spindown life counter. New in this set, ANY rare or mythic rare can appear as a date-stamped promo card! Each player builds a 40 card minimum deck from the cards in their kit and basic lands.

Pre-registration (at the store or over the phone) is STRONGLY recommended. Pre-Release events are very popular and this event especially so. Avoid disappointment and pre-register early!

There will be 4 total swiss rounds with prize payouts based on your overall record in the event. In addition, each player who wins a round will get a free draw from our special Promo Board of Mystery! The Board of Mystery will be seeded with lots of promos from previous releases, including some very special surprises!