First up, the Wall of Fire and Wall of Ice set provides six pieces of fire and six pieces of ice.  Each of these heavy plastic pieces is molded in translucent red and translucent blue respectively.  The pieces are finely molded with decent levels of surface detail, although each piece is identical to each other.  The individual wall pieces are crafted so that they can interlock with each other to form an unbroken straight wall, or you can place them abutting each other to form any shape your spell takes.  The walls themselves are wide enough to fill a 1-inch square on a typical battle map. 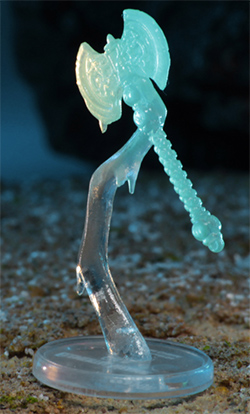 The next set is the Arcane Fury & Divine Might set which contains 17 individual miniatures.  All but one are on small bases which fit in a single 1-inch square on a battle map.  The remaining figure, the Phantom Steed, is on a large base which occupies four 1-inch squares.  16 of the 17 miniatures are molded in various shades of translucent plastic, while the grasping vine is a more realistic brown color to represent bark.

The spells represented include:

Some of these miniatures will be more useful than others in a typical session of Dungeons & Dragons.  Most clerics know and use the Spiritual Weapon spell.  Being able to place a translucent mace or warhammer on the battle map, rather than a die or some other token, really brings the spell to life.  On the other hand, Elemental Weapon is a spell that affects an existing weapon rather than creating a magical spiritual weapon that moves and attacks independently.  While you may use the Elemental Weapon miniatures to remind you of the spell effect and which element you chose, you won’t likely be placing this on the battle map.

The Grasping Vine and Cloud of Daggers will see frequent use on your battle maps.  The Grasping Vine in particular is useful, as the spell requires placement in an unoccupied square.  Most wizards will place a Cloud of Daggers directly on top of another creature, which slightly limits its usefulness as a miniature, since you can’t have two things occupying the same physical space on your battle map.

Mage Hand, Dancing Lights, Unseen Servant, and Tenser’s Floating Disk will likely not see much use on your tabletop, as these spells usually represent actions taken outside of combat, when a map grid is not in use.  Mage Hand is a particularly short-lived effect that doesn’t make a lot of sense for a miniature.

In a recent campaign run at the Londonderry store, the Phantom Steed miniature was the most often used of this set, as a Wizard would provide a steed for the party’s Cavalier at every opportunity.

If you are a heavy user of tactical combat using miniatures on a battle grid, both of these sets are highly recommended, and will add a unique visual appeal to your games.

Note: Images in this article are borrowed from the WizKids website, and are copyright 2018, by Wizards of the Coast.