About the Relentless Dragon Game Stores 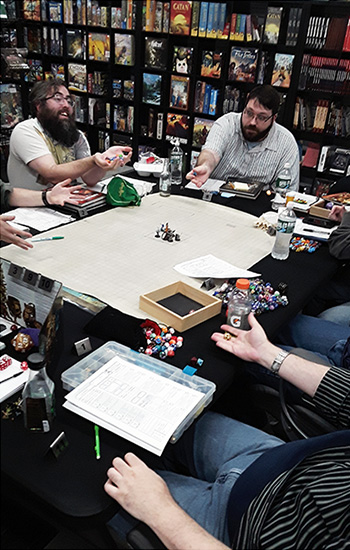 Friendly Local Game Stores are unique in that they aren’t just places to buy things—our customers often stay for a while, sometimes hours, in our sizable free gaming area. We offer “regular” tables for card and board games like Magic: the Gathering, Pokémon, A Game of Thrones, Catan, Carcassonne, and Ticket to Ride, as well as several “standing” tables appropriate for tabletop miniatures games like Warhammer 40k, Age of Sigmar, Warmachine or Hordes, X-Wing, Armada, or historical games.

We subsequently moved the store to Nashua from Amherst in 2009, to be closer to home as well as to the students at Nashua Community College. Moving to Nashua also made us more accessible to our customers who are vehicularly challenged, as the Nashua City Bus stops just a bit down the road from our store.

In November 2014, we made a move only ten numbers down the street, from 493 to 483 Amherst Street. The move increased our space by 500 square feet, and enabled us to provide a brighter space for playing, along with a dramatically increased selection of board games.

In the spring of 2016, we expanded into the space next to ours, which doubled our square footage, and allowed us to install two dedicated 4′ x 6′ miniature wargaming tables.